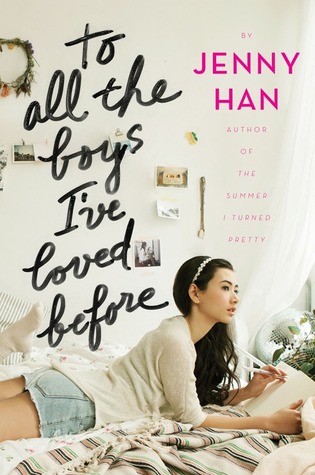 This was actually quite adorable- I’m not the biggest contemporary fan (though, since I’m currently WRITING a contemporary I should probably be reading more…), but I thoroughly enjoyed it. Lara Jean is one of the most relatable characters I’ve ever read, and she seemed so real. She has a ‘quirky’ sense of style, she likes to knit but never finishes anything, she wants to be a good sister but has trouble sometimes, her love life is nonexistent (although she falls in love with all the boys she has zero chance with whatsoever), she likes to bake, and she is a Scared Driver.

As I said, relatable.

Lara Jean has a teal hatbox, in which she puts letters she plans never to send. These letters are to all the boys she’s fallen in love with, and she hides them because if they were ever sent, she’d be screwed. Really, really screwed.

Of course, that’s exactly what happens.

So now, not only does she have her older sister’s departure for college in Scotland and her dad and little sister to care for, not to mention her junior year to keep in order, but she’s got five boys- one of whom her sister’s boyfriend- who now know precisely what she thought of them at one time. And as soon as all of this unfolds, she wonders if those feelings ever truly went away. Before long, she’s swept up into an elaborate charade with one of them to make sure she doesn’t lose face with one of the others, and everything spins out of control, and they eat food, and I’m in love.

Like seriously. Alllllllllllll the food. Let me indulge you with a quote:

“But it’s so hard to pick one kind!” I burst out. “I mean, there’s coconut cake, the kind with white frosting that looks like a snowball — I like that a lot. But then I also like cheesecake, and lemon cake, and carrot cake. Also red velvet cake with cream cheese frosting, and chocolate cake with chocolate ganache frosting.” I pause. “Have you ever had olive-oil cake?”
“No. That sounds weird.”
“It’s really, really good. Really moist and delicious. I’ll make it for you.”

See??? SHE LIKES OLIVE OIL CAKE. SHE IS A GOOD HUMAN.

All in all, I think I need the sequel desperately. I’m not entirely sure what I think about the romance-I know, I know, it’s called To All The Boys I’ve LOVED Before, but still…. There was so much more to it than that. I really hate books that are only about love stories- um, no, romance isn’t necessarily the only thing on the mind of the average high school student?- but books like this? Where there’s MORE to it, and the characters are so real, and there’s conflict and backstory and cake and sisters (the portrayal of sisters is A++) and everything is just incredible and yes.

As a lover of epic fantasy and lots of stabbiness, I will vouch for this book. There might not be (much) death in this, but there IS cake and brownies and that makes up for it entirely.

Hey, all- I don’t post a ton on here anymore, mostly because my studies have taken over my life (in the best way possible) and because- as it has been for a lot of people- stress is not the most conducive reading environment. Today has been a good day, though, and I’ve taken my primary source textbook outside with some iced coffee and, as it tends to do, the warmth and sunlight is making everything a little bit better. ❤️
We love us a near-dead bookstagram-turned-social-distancing account. #quarantine #covid_19 #bookstagram #paint #paintingbynumbers #paintplot #notsponsored
“People... like to invent monsters and monstrosities. Then they seem less monstrous themselves” • Have you all gotten the chance to watch #thewitchernetflix? I binged it all in three days and am currently trying not to do it again! Maybe reading it will help delay the rewatch, but in all honesty I have my doubts. • #bookstagram #book #bookdragon #bookwyrm #bookworm #books #bookish #bookblog #bookphotography #booksincollege #college #university #thewitcher #swordofdestiny #geraltofrivia #yennefer
Haven’t posted here for a bit- it’s been a chaotic semester! I just wanted to wish all of my fellow students good luck in this finals season. Hope you all get somewhat of a break at some point this week! ❤️😳
Julia’s hanging on, and so am I. Classes have been pretty chaotic- I’m getting ready to perform Carmina Burana in a little less than two weeks, and this cold does *not* want to let me go! Thank you all for sticking with me as I get my bearings in this new environment, I truly appreciate the support. • #bookstagram #book #bookdragon #bookwyrm #bookworm #books #bookish #bookblog #bookphotography #booksincollege #college #university
So I’d written and scheduled a post and a half for this week, but I was sick over the weekend and this morning I spilled on my laptop and have been backing things up since, so pls send good thoughts/prayers because last week’s rough time hasn’t seemed to end just yet and your girl’s struggling. 😬😬 • #bookstagram #book #bookdragon #bookwyrm #bookworm #books #bookish #bookblog #bookphotography #booksincollege #college #university